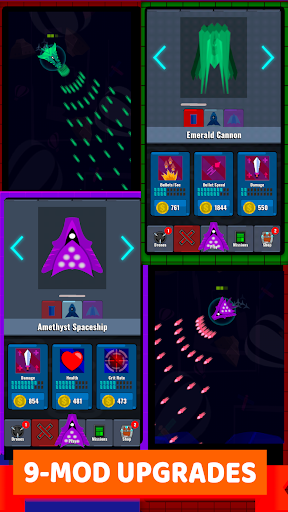 Is it an ASTEROID? is it a METEOR? No! It's an alien. NO! It's a whole fleet. It almost looks like an... ALIEN INVASION! Emergency on our galaxy! dispatch all combat shooters immediately! Our galaxy is under attack. I repeat an alien fleet is breaching Earth!

Inspired by retro games, Bumper Aliens is a unique arcade games 360 shooter where you have to defend our galaxy from an intergalactic fleet of bouncy aliens! Enjoy from 360 automatic aim and attack the bumper alien with lethal guns by dragging your finger to move. Beware of their bouncy physics and momentum. Alien will come at you in waves boosting from all directions and at times you will be heavily under attack. Your quick reflexes, hand to eye coordination, and epic skills will decide whether you can blast the alien invasion back to their mothership.

This is not an easy game like other arcade games. Surprise! This bullet hell game happens to also be an incremental game. There is an upgrade shop available to you to upgrade and customize your spacecraft in 9 UNIQUE ways. Battle and collect enough coins by shooting enemies down and picking up their loot. level up the aircraft's cannon bullets per second, damage per hit, offline earnings, special skills and overall survival capabilities. This is the full space combat experience. A retro games but with many features!

Drones are for companion! These handy machinery will help you battle and BLAST many germs at once. Each Drone has a unique ability that you can use at demand. Each drone can also be upgraded to reach their true potential.

HOW TO PLAY
- One Finger Control: Drag to move!
- Dodge the enemies
- Get close enough to the monsters and the spaceship will automatically shoot at them
- Reach the required number of kills to beat the stage
- Collect coins dropped by the alien to purchase upgrades for your spaceship
- Collect DRONES to help you in battle!
- Participate in the daily LEADERBOARD to get REWARDS!
- Spin the Roulette for extra loot!
- Work on quests!

If you like shoot em ups and arcade games you will most likely love this retro inspired classic arcade games!

PLOT
- 75 million years ago gigantic sea creatures ruled the world, strong, smart and plentiful.
- News of their vast green and blue planet spread throughout the galaxies and one alien planet was threatened by Earth and so they plotted to destroy it.
- They traveled 20 light years to reach Earth and brought their strongest weapons to destroy the Segalosaurs, the toughest and wisest of all creatures on Earth.
- The Gliesians suffered great losses and evacuated into smaller pods. Their mothership grew hotter and hotter as it crashed through the atmosphere resembling a flaming asteroid until it finally pounded into the earth’s crust sending so much ash and debris into the air that the sun was clouded across the globe
- The Segalosaurs tried to fight this disaster but their attempt became futile. The Earth's atmosphere suffered a great dis-balance and soon it was too cold and they all started dying until there was only one left. As he watched all his comrades dead around him, the last dinosaur used the rest of his strength to seal the earth in ice so that the Gliesians would not be able to take advantage of the earth’s power without anyone left to protect it. He made a vow that the dinosaurs would rest until the time came again to rise and defeat the Gliesians and that the earth would remain in slumber until the next generation of warriors came into existence.


If you experience any bugs please let us know at bumperalienservices@gmail.com.
We will fix them ASAP!
Daily Leaderboard Fixed! Now you can set a high score and collect a reward at the end of the day if you beat 40% or more of players!
Tweaked some parameters like health and power ups to create even more intense game play.
New power up now enables you to shoot up to 5 lines of bullets at once.
New power up allows you to expand your field of view!