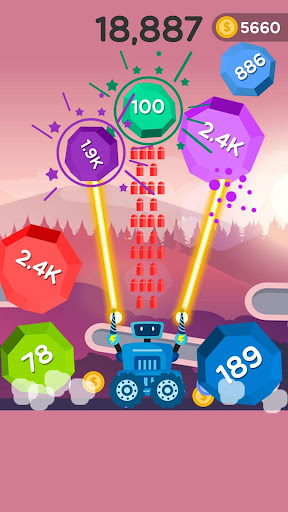 Blast Blast Ball - Shooting Ball - The most addictive ball shooting game for 2018 and 2019.

Blast Blast Ball - Shooting Ball is an addictive arcade game which allows you to use cannons to shoot the balls containing numbers.
The higher the level is, the higher number the ball contains. These magic balls will jump up and down so you must avoid them and shoot to destroy all the balls.
When the big balls have been shot down, they will split into smaller balls containing smaller numbers.
The strongest balls are the Red one and the weakest are the Green one.
Your mission is to move your cannon to avoid and nonstop shoot until you destroy all the balls.

*** FEATURES ***
- Choose up to 9 types of cannon with different bullets.
- Upgrade cannons to get higher scores and pass more levels.
- Many beautiful themes in each game.
- One big balls will split into many small balls when the number decreases.
- Magic ball is many color ball and it change color when decrease number of ball
- The red ball is strongest and it change to green ball when it prepare for split or destroy
- New type of Egg Shooter and more fun.
- Fix bugs
Tags : Arcade Games ONESOFT