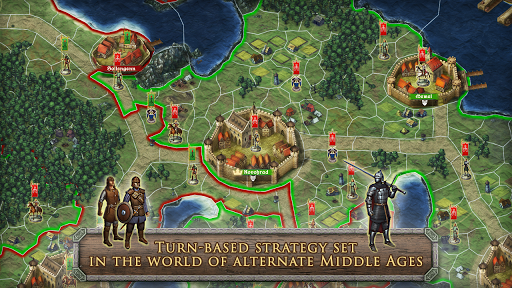 Dark Ages is a turn-based strategy game set in the violent world of an alternate Middle Ages of Europe. Vikings against war elephants, musketeers against the Mongol cavalry, ancient phalanx legions against crusaders; the deadliest armies in history of the Earth clashing in bloody victorious war.

An army without leadership is merely a mob. In Dark Ages, troops follow the lead of their commanders: unique leaders with their own virtues, vices, talents, risks, history and weaknesses.

Take the throne of a small kingdom in Europe being torn apart by feuds and threatened by militant neighbors, and try to survive the Dark Ages.

⚔️NO POLITICS, JUST CONQUER
6 factions with unique generals and squads: the nimble nomads of the Horde, the well-armored and disciplined Imperial soldiers, the mad Sea Barbarians clad in furs, the Union’s guilds welding gunpowder, the proud knights of the North, and the exotic cults of the Twin Rivers.

⚔️REAL VALUE
Over 50 types of squads based on real historical troops. No armored bikinis or spiked pauldrons here!

⚔️VICTORIOUS LEADERS
Generals are the linchpin of a squad, and their skills and abilities can drastically change the outcome of a battle. Each general has a unique personality generated at the beginning of each game. Each has their own appearance, character traits, and abilities. It's impossible to predict who will appear the next go ‘round: a brave but simple knight, a talented but greedy tactical genius, or a bloodthirsty barbarian who instills fear in friend and foe alike.

⚔️YOUR HISTORY, YOUR SCENARIO
Feel like an elite mercenary who solves problems of influential countries: win a civil war, fight off nomads, deal with pirates raiding the coast, save a kingdom ravaged by plague, or crush a peasant uprising.

⚔️BUILD YOUR ARMY
Upgrade your squads at the royal forge and lead them to a victorious march that will go down in history of Medieval Europe!

- New map: Mesopotamia! Lead the well-armored and disciplined Imperial soldiers to victory, or let the enemies fall to the onslaught of the exotic cults of the Twin Rivers!
- Use the Legendary Commander Barracks to develop your army!
- The interface has been reworked.
- Bug fixes.